Want To Workout While Wearing Heels? Check Out This Andheri Class 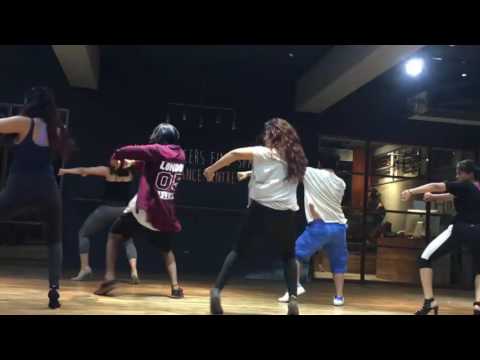 We’ve always been told that high heels aren’t good for us – but did you know there’s a workout class in Mumbai which actually says you should break a sweat while tottering around in heels? We gave this class in Andheri a try.

After procuring a pair of heels that won’t betray us, we gathered our courage and got to The Big Dance Centre in Andheri. Mrigakshi, the hip hopper with the cool red hair we once wrote about takes this class. The class began with a warm-up {minus heels}. We concentrated on doing crunches, and that was a bit of a shock to our unsuspecting stomach. After the warm-up, we put on our heels. The real challenge began now. For someone who has been told that she resembles an awkward penguin while strutting in heels, the idea of doing hip-hop in them seemed rather impossible.

Luckily, the class was broken down in a way that got us used to moving around in heels. For the first few minutes, we were simply asked to stand in them, and strike different poses to the music that was playing. Simple? Welll… maybe for some. The next step was to walk across the room, but with a certain attitude. Toe, heel, toe, heel, we sashayed our way to and fro the class, trying to avoid the clinkity clink of our heels on the wooden floor. So far, so good.

One Step by Ciara was the chosen song, and Mrigakshi began to teach us the short choreography to the song. It took a few takes, but as we kept practicing, we got sucked into having fun with the dance, and forgot that we are doing this all in heels. The initial exercises help in getting used to the footwear too. Overall, heels keep you standing taller, elevate your hips and arch your back.

We’d say that if you love dancing, and have had a little experience in it, this class would be challenging yet fun for you. Absolutely complete beginners may struggle just a little bit, however, while taking this up for the first time.

Heels are fierce, and we loved dancing in them. Should walking on stilts be our next attempt? Let us know. And till then, you should try out hip hop on heels too. It’s super fun, and makes a great video for your Instagram feed, you know what I’m sayin’?

This class is so not just for girls – we danced with two men and two women, and let’s be real – the guys were killing it more than us. So go for it. Stamp on these stereotypes and have fun, ladies and gentlemen.